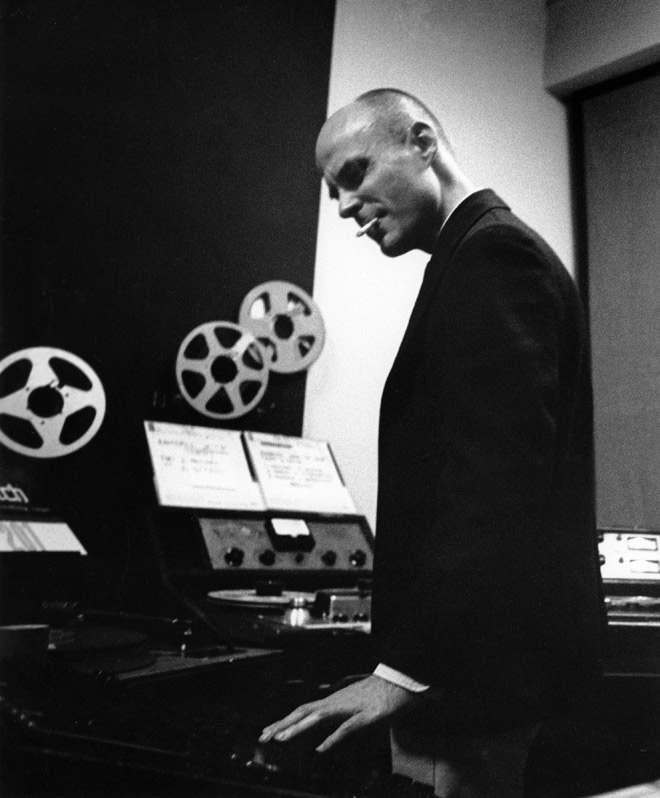 Tod Dockstader was born in 1932 in St.Paul, Minnesota. After majoring in psychology and art at the University of Minnesota, he went on to study painting and film, earning money by drawing cartoons for local newspapers and magazines. In 1955, Dockstader moved to California with his partner, Beverly, who had got a job teaching at an elementary school in Hollywood. He went looking for work and was rejected by Disney, but welcomed by United Productions of America (UPA) to work as an apprentice film editor, cutting picture and sound for animated cartoons including “Mr.Magoo” and “Gerald McBoing Boing.” He then moved on to writing and storyboarding cartoons.

Dockstader moved to New York in 1958 and became a self-taught sound engineer and sound effects specialist and apprenticed as a recording engineer at Gotham Recording Studios. It was around this time that he started to use his off-work hours to experiment with mixing and manipulating sounds on magnetic tape (musique concrète). By 1960 he had amassed enough material to assemble his first record Eight Electronic Pieces which was released on the Folkways label in 1961 (this would later be used in the soundtrack of Fellini’s Satyricon). The last of the eight pieces was later re-worked into his first stereo piece [Traveling Music]((/compositions/traveling-music/).</p>

In 1961 he applied to use the facilities at the Columbia-Princeton Electronic Music Center and was denied access by Vladimir Ussachevsky. Ussachevsky’s official reason was the “overstrained” scheduling of the studios, although many suspect that Dockstader’s lack of academic training was a factor in the decision.

He continued to create music throughout the first half of the 60s, working principally with tape manipulation effects. His last piece at Gotham was Four Telemetry Tapes in 1965, after which he left to work as an audio-visual designer on the Air Canada Pavillion at Montreal’s Expo ‘67. It was around this time in 1966 that some of Dockstader’s pieces were released on three Owl L.P.s, and his work became known to a larger audience. He achieved modest recognition and radio play alongside the likes of Karlheinz Stockhausen, Edgard Varèse, and John Cage. 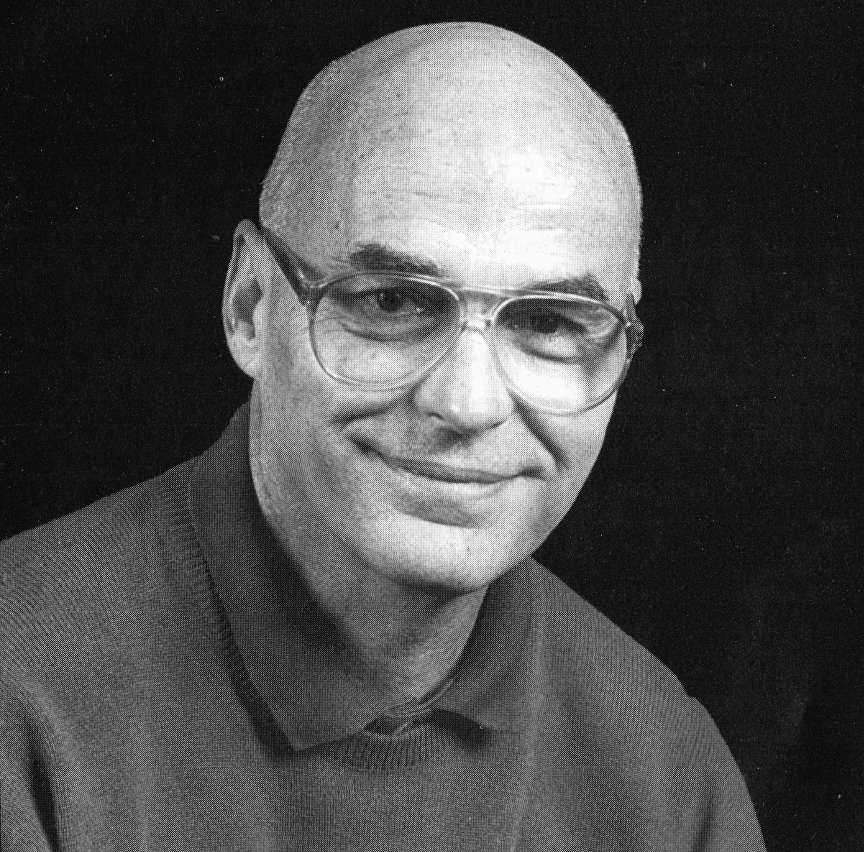 After leaving New York in the late 1960s he formed the audio-visual service Westport Communications Group along with business partner, and former Gotham executive, Fred Hertz. The company produced award-winning educational films for the American Heritage series, which Tod wrote, directed, and created sound for. By that time (late 60s) Tod and Beverly had a daughter, Tina who recalls her father immersing himself into each new project, becoming an expert on the subject at hand, be it the Civil War, the Roaring 20s, or some other aspect of American History.

Through his own company he was able to purchase the equipment, including at that time a Moog and two ARP Synthesizers. His only musical output of this period were two L.P.s of short, synth-based pieces released by Boosey & Hawkes and intended for film, radio, and television use.

In the late 90s, Tina, who was now starting a family of her own in Massachusetts, convinced Tod to get a computer so that they could keep in contact via email. He quickly realized the computer’s potential for creating music and set about transferring hours and hours of DATs that he had accumulated over the years. During this time he released the three disc set Aerial and collaborated with David Lee Myers on two albums.

Later in his life, Tod cared for his wife Beverly, who suffered from Alzheimer’s, and passed away peacefully at the age of 84 on February 27th, 2015 surrounded by his friends and family while listening to his own music. 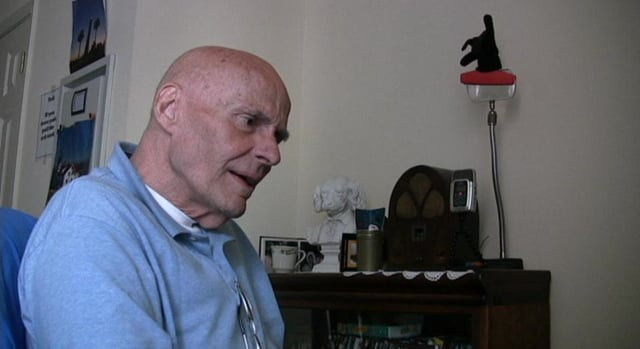 I don’t remember just when I first heard musique concrète; it must have been in the early 50s. I think I liked the idea of it more than the Toonerville-Trolley sound of the early pieces. In Pierre Schaeffer’s original definition, it meant working with the sound in your ears, directly with the sound, as opposed to “abstract” music in which the sounds are written. Like Schaeffer, a working sound engineer, I had the training to be a “worker in rhythms, frequencies and intensities.” As a non-musician, I couldn’t write music, but this “new art of sound” didn’t need notation. In the beginning, musique concrète wasn’t even agreed upon to be music; Schaeffer’s first presentation of his work was called “a concert of noises.”

It also seemed to me, this new art of sound, a very democratic art. I’d studied painting for five years and gave it up, primarily because I came to dislike the exclusivity of it; a painting became the property of one person, one institution. I liked the idea that Schaeffer’s first work was created in a (public) radio studio; his first premieres were broadcasts, not the “narrowcasts” of concert hall performances. And, when you bought a recording of it, you owned the work just as much as anyone else, because the work was a recording. So, I pursued that.

Any art is, of course, not just all the possibilities; it is also choice - organization. That this new sound-art could be rigorously organized I first learned by hearing Edgar Varèse’s Poème Élèctronique of 1958 - a powerfully dramatic work in which the strength and personality of choice among all the possibilities is very evident. My choice of the term “Organized Sound” for my own work was, in part, a tribute to the Poème and Varèse.

I also chose it because, in the ’60s, the term “electronic music” was coming to mean music made purely of synthetic sound, and I was working in both “concrete” and electronically generated sounds.

By 1960, in addition to Varèse’s Poème, I’d heard tape music pieces by Berio, Leuning, Ussachevsky, and Stockhausen. Also, I had always listened to instrumental music. From the start, I had preferred 20th century music, or at least what there was of it that was dramatic, colorful, and adventurous - everything from Stravinsky’s Firebird to Messiaen’s Turangulila Symphony to Boulez’s Le Marteau sans maitre (three that pop into mind). Of all I heard, the three electronic pieces I can hum are Varèse’s Poème, Stockhausen’s Gesang der Jünglinge.

As I went, the sound got easier but the organization got harder, and I entered into a struggle I hadn’t anticipated. John Cage (in Silence) tells of the effort it took him to overcome his musical training and become a Listener to sound again. There came a struggle to resist forcing the sounds too far into Music and away from a true art of sound, This, I think, is the continuing struggle in electronic music of all kinds. It’s very hard to stay a Listener. I think I was aided, in my time and circumstances, by not having a synthesizer of any kind: no keyboards, no pre-set voices.

My “synthesizer” for everything on this CD was one or two sine-wave test generators (“oscillators” in those days) which were “played” by turning a dial. I forced them to produce harmonics (square waves) by amplifying them into distortion, and got the pulse-trains out of them by temporarily rewiring them into instability (temporarily, because they had to resume life the next day as stable test generators). The “notes” they produced were achieved by editing tape, not by note (by note by note…). For Quatermass, I acquired a Heathkit test generator of my own, which I built to allow me to “switch” tones instead of having to “tune” them (like a radio). Also, when turned on or off, it made marvellous shrieks and groans.

Some composers who worked in what’s been called the “glorious junkshop” of the now-classic tape studios have looked back in awe and dismay at the amount of hard, physical work it took to make a piece. But easier isn’t necessarily better. I enjoyed it: I found it was like the best part of painting - standing on your feet all day, moving around, working with your hands , sometimes very fast, more often very slowly, mixing, cutting, stitching it together with the sound in your ears. It had a muscular joy to it. I think a lot of us had fun up on that singin high wire, teetering between control and chaos, trying to push the sound a little farther forward toward Something we hadn’t heard before, working in it… Listening.